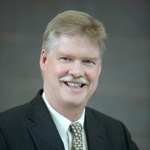 "You cannot afford to stand aloof from your professional colleagues in any place. Join their associations, mingle in their meetings, giving of the best of your talents, gathering here, scattering there; but everywhere showing that you are at all times faithful students, as willing to teach as to be taught.”

This quote from Sir William Osler sums up Dr. Peter Hamilton’s approach to life. It is attached to Peter’s desk blotter and he lives out these words in his practice and his teaching.

After obtaining his medical qualification in South Africa in 1979, Peter went to Zimbabwe and, five years later, came to Edmonton to train in Nephrology. Along the way, he became inspired by the pursuit of the diagnosis. This inspiration led him to be a general internist, what he describes as the “quarterback position” of medicine. He likes to see the whole picture and be able to coordinate the resources needed to solve the entire problem.

He joined the University of Alberta’s Department of Medicine in 1990. For ten years—he just stepped down in November—Peter was the Director of Postgraduate Medical Education in the Department of Medicine. In this role, he has passed along his passion for medicine to countless students. “Passion is the most important thing to have in any job. You need to show that passion too; it’s catching. That’s why I love working with junior learners. I catch their eagerness and their passion.” His numerous teaching awards show that Peter’s passion for education has not gone unnoticed.

As one of his nominators explains, “Peter makes a point to routinely include students of all healthcare backgrounds on a day-to-day basis in his clinical practice and deliver education that is second to none! In doing so, he, as a clinician has enabled pharmacy students and pharmacists alike to interact for the betterment of patient care and promotes this collaboration for optimization of patient care. He has enabled clinical pharmacy services to extend to a broader population of patients and healthcare providers.”

Peter has also long advocated for patient-centred medicine and professional teamwork. “Professions need to support and learn from one another. Teamwork is more efficient; it produces better results. Some professionals, like pharmacists and nurses, see patients more often and at times when doctors don’t. We need everyone involved to get the whole picture. Everyone brings something to the table. Others also bring different nuances to problems. Every time I attend a team meeting, I take something new away.”

Peter sees even more advantages of collaboration. “Patients see that you’re working together. They are comforted by that. All health professionals need to be advocates for patients. I worry a bit about the sense of entitlement some health professionals have. I think we really need to ask ourselves, ‘Are we giving value to society? Are we doing the best we can for the patient?’”

Peter has modelled collaborative behaviour all his professional life. Of note for pharmacists are his roles in pharmacist-directed anticoagulation management and his work on Drugs and Drugs: A Practical Guide to the Safe Use of Common Drugs in Adults.

Peter was an early supporter of pharmacist efforts to manage patients’ anticoagulation services. He played a key role in establishing the Anticoagulation Management Service at the University of Alberta Hospital and still serves as one of its Medical Directors. Although he faced early opposition from colleagues, he continued to publicly defend the program. “The hostility was palpable, but I knew the people, I read the proposal, I knew it would work. I believed in it.” A second quote, from Martin Luther King, guided his actions: “Our lives begin to end the day we become silent about things that matter.”

Peter’s work as co-editor of Drugs and Drugs is also a story of teamwork. “David Hui [the other editor], a brilliant young medical resident, approached me with an idea for a medical textbook. I said one of the things I was most concerned about was junior learners’ knowledge of common drugs—the ones you’d find on most wards. I wanted practical tips they could easily reference when they were on rotation. Before I knew it, David came back with a plan and book idea all put together. This became Drugs and Drugs. (It is available for free download at http://www.depmed.ualberta.ca/drugs&drugs/).

“We knew we wanted to incorporate as many people as possible. We created a chapter template and then invited contributions. You’ll see many chapters written by pharmacists. We also had pharmacist reviewers. Nobody got paid a cent. It was just an amazing collaboration at every level.”

Looking over Peter’s work as a patient advocate, collaborator, teacher, and role model, it becomes obvious that not only is he a Friend of Pharmacy, but a friend of students, patients, and peers. “I always tell my students that they need to keep their passion alive. Remember why you chose your profession in the first place.” Peter’s passions are clearly still alive, and all he comes in contact with are clearly the better for it.