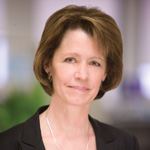 She has the accolades, high profile position, and advanced degrees, but it is Gail Hufty’s fervent belief in doing what is best for patients that has won her the respect and admiration of her peers, regulators, academia, and, most especially, the patients who have benefitted from the strategies and programs she has helped put in place.

While she is the first to say she didn’t accomplish anything alone – “I’m only as good as the people I work with” – it has become clear throughout her career that she has both a talent for choosing people who will rise to meet the occasion and a team building style that encourages excellence and innovation.

Gail began her career in Nuclear Medicine and Diagnostic Imaging. She became the Business Leader for the Craniofacial Osseointegration and Maxillofacial Prosthetic Rehabilitation Unit (COMPRU) at the Misericordia Hospital in 1994, where a major focus of her role was on Quality. While working at COMPRU she also completed her MBA. In 2002, Gail moved to the University of Alberta as the Senior Research Facilitator for the Faculty of Medicine and Dentistry.

The opportunity for a leadership role in Pharmacy at Alberta Health Services – Edmonton (formerly Capital Health) arose from discussions with Michele Lahey (former Capital Health Executive VP). “I have tremendous respect for Michele, who is, without a doubt, one of the best leaders I have ever known. Michele was recruiting for leadership of the Regional Pharmacy program and inquired about my interest. Initially, I was not sure about my fit, given that I was not a pharmacist. However, after discussions with clinical colleagues and several interviews, I was offered and decided to accept the position [as Capital Health’s Director of Regional Pharmacy Services in 2004]. I was impressed with the people I met in Pharmacy and felt I could add value for the program through my leadership experience and skills. My plan was to spend two to three years in this role - that was five years ago."

What Gail didn’t count on was the deep connection she would feel with the pharmacy community. “Pharmacists have an almost old-fashioned professionalism about them. They don’t judge until they get to know someone. They are highly ethical and their values, in terms of relationships, collaboration, respect and dignity, fit completely with mine.

“As I began this new role, many staff wanted to know what I was going to do to address issues in the program. My response was that the best way to resolve issues was to work together. It was not about me, it was about creating an effective we.” Gail worked to understand the role of the pharmacist in the health care setting. She gained the respect of the pharmacy community by developing strong relationships with key stakeholders and listening to the ideas of those around her. “One of my first objectives was to build a leadership team. There were a number of talented people in the system, who, given the opportunity, could (and did) do great things for Pharmacy. My job was simply to create those opportunities. I believe that most people want the same things in a career: to be supported to do their work, to be heard in terms of how to improve that work, and to be recognized for their achievements.” One of Gail’s greatest sources of satisfaction is the people she works with and the opportunity to support their growth and development.

She also finds it deeply satisfying to see initiatives come to fruition and improve patient care. Gail’s understanding of and belief in the pharmacy profession allowed her to effectively communicate key strategic issues facing the pharmacy program to senior leadership and led to the addition of much needed new staffing. Gail also successfully advocated for funding for the COLLABORATE study. This controlled clinical trial examined the impact of integrating clinical pharmacists into the patient care team and led to the implementation of front-line multidisciplinary team pharmacists. Under Gail’s lead, Alberta Health Services – Edmonton was the first to formally support the enhanced scope of pharmacist practice by changing hospital policies to enable pharmacist prescribing. Gail’s commitment to quality health care has led to key outcomes such as improved pharmacy information and distribution systems, and a systematic approach to dealing with and preventing medication errors. All of these efforts receive a resounding “Yes” when judged according to Gail’s rating system: Did it make a difference to the people we serve, the people who provide the service, and the profession?

Just as Gail is committed to quality pharmacist practice and empowering leadership from within, she has a strong commitment to nurturing those just starting out in the profession. Under Gail’s leadership, the number of experiential training sites within Capital Health increased from 28 in 2004 to 78 in 2008. Applications for summer student positions and hospital residency programs swelled, post-doctoral pharmacy fellowships have been created and the number of new graduate recruits to hospital positions increased.

Word has spread about the achievements being realized by Pharmacy in Edmonton. “I’m really proud of the growth of our reputation, locally, within the province and across the country. This is the result of the work of an exceptional group of dedicated and highly innovative staff.”

At her first diagnostic imaging workplace, ironically in the basement of the U of A Dentistry/Pharmacy building, Gail never imagined how her career would evolve. And she certainly never imagined that she would move from that very early role working with radiopharmaceuticals to one of the province’s most influential pharmacy positions. That, however, is exactly what has happened. Pharmacy’s gain is definitely Nuclear Medicine’s loss.

Under her leadership, providing the highest possible quality of patient care has become the guiding principle for developing work plans and programs to support pharmacists and technicians. It is understood and agreed that every service provided by pharmacy needs to improve patient outcomes and facilitate the delivery of quality care. Her contributions to the pharmacy profession in the form of strategic planning, advocacy and leadership have resulted in more patients receiving better pharmaceutical care.

And at the end of the day, that’s what being a Friend of Pharmacy is all about.