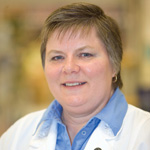 Your playing small does not serve the world.

Over her lifetime, she has made lasting contributions to her family, profession, and community through her countless volunteer efforts. “I believe that we are here on earth to touch other people’s lives. I believe we are called to be of service to our community. I learned this at home and both of my parents modeled this for me. Giving is a part of who I am, my personality.”

Now, Rita models the spirit of giving for her three daughters. She began when they were young by becoming involved in their sports, school, and Girl Guide activities. “It’s fun! You get to be with your kids. They’re with you such a short time and they teach you so much, why wouldn’t you want to spend all the time you can with them?”

Rita’s strong leadership and organizational skills soon moved her from the sidelines of the activities to the front and centre. She also attributes her promotion to one key attitude: “I’m not afraid to learn. I knew nothing about Girl Guides, but had three girls who wanted to be part of the program. So, I learned right along side them. I knew nothing about church stewardship and raising funds, so I learned. I attended seminars or read books and talked to mentors.”

Rita also credits her parents for instilling her love of learning. “My mother always told me, ‘What you learn, no one can take away.’ I think this was a powerful message for her. Both my parents were immigrants who lived through wars and my mother had lost everything she owned twice.” Rita recently paid tribute to her parents by having a book written about their lives so that their stories and example would live on.

All of Rita’s learning came in handy when she founded the Barrhead recycling depot; chaired the committee and fundraising efforts for the Cecile Martin Memorial Park; served as a church school teacher, board member, stewardship campaign leader, and building committee finance chair for the Barrhead United Church; led at the Unit, District, Division and Area levels for Girl Guides of Canada; was a school band “booster” for nine years; coached, managed, and drove for the Barrhead Minor Ball Association for 18 years; organized community Christmas dinners for the less fortunate; and, most recently, organized Barrhead’s first Habitat for Humanity effort.

It’s easy to forget that she also held down the roles of mother, wife, caregiver of aging parents, and pharmacist at the same time! So what drives her to consistently make the effort?

“At one course I attended, our facilitator cited the law of physics that says every action has an equal and opposite reaction. He suggested we keep a notebook and record everything we give at the front and everything we get at the back. He said it would be even and that our pages would meet in the centre. I haven’t actually done the exercise, but I believe this to be true.

“I get a great deal of personal satisfaction as well, knowing that I have made a difference. When I take the Girl Guides traveling, there are many girls whose only trip might be the one I helped them do. By teaching them to save money bit by bit and then fundraising the rest, we are able to do it. One memorable trip was backpacking to Mt. Robson, BC. We stopped to take pictures at the BC sign, which was new for some girls as they had never been out of Alberta. Can you imagine their joy when they also experienced England, Scotland, Paris, Switzerland, or Germany? Or when they went sea kayaking and dog sledding? And remember, I get to do all those things too!”

Rita doesn’t just “get to do” those things – she makes them happen. Whether she knows it or not, Rita is a living demonstration of one other line from Williamson’s poem. It says, “We are all meant to shine.” Rita definitely shines, and the lives of those around her are better for it.