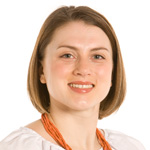 It should come as no surprise that Tania’s Facebook profile photo depicts a young woman in a Wonder Woman costume. In addition to completing her PharmD in 2000, holding the position of Clinical Practice Manager, North & Experiential Education, Alberta Health Services –Pharmacy Services at the U of A Hospital, and being the mother of two young children, Tania continuously carves out time to support and develop her community.

Tania’s volunteer involvement with the Ukrainian community dates back to her teens when she tagged along with her father to help out in the kitchen for the Karpaty Ukrainian pavilion during Folkfest, Saskatoon’s multicultural festival. “That was when I noticed the sense of community, and family. My Ukrainian community gave me discipline and support and opportunity. Now, I want to make sure that my children have those same opportunities. It won’t just happen by itself, so I feel it’s important to support our community and cultivate it.”

Tania has cultivated and nurtured her culture and community wherever she has lived. She has been involved in church, choir, and dance groups in Saskatoon, Yorkton, Vancouver, and Edmonton.

No matter the project, organization or location, Tania is known for consistently delivering high quality contributions and getting the job done. “There’s no point in doing a job poorly,” explains Tania. “And, I believe it’s important to make the time to get involved. Nobody has more or less time. You just have to choose your priorities, decide how you want to spend your time, and find something you’re passionate about. If you make the time, you get as much or more out of it as you put in.”

Tania is not one to just watch from the sidelines either. “My parents taught me that if you’re not going to be involved, be quiet. If you are going to be involved, roll up your sleeves.” That’s advice she’s taken to heart as the president of the National Executive of Ukrainian Orthodox Youth; treasurer and chair of Tropak Ukrainian Cultural and Education Society, president of the Ukrainian Women’s Association of Canada – Lesia Ukrainka Branch, member of the Joint Standing Committee of the Ukrainian Self-Reliance of Canada and the Ukrainian Orthodox Church of Canada, and secretary and now capital campaign organizing committee member of St. John’s Institute.

It is with the last two projects that Tania has been most involved recently. Working with the St. John’s Institute, Tania is taking a leadership role in its ongoing revitalization. Her involvement brings a “youthful” perspective and has encouraged other young professionals to take on leadership positions in the organization.

For the Joint Standing Committee, Tania conducted focus groups and a survey across the country to gauge the needs and interests of young adults and increase their involvement in the Ukrainian community. She was able to draw on her analytical abilities honed as a pharmacist to bring focus to her findings. “I always find that volunteering enhances my work and vice versa. Through volunteering, I use and improve my communication and strategic thinking, see different approaches and learn new skills.”

While Tania finds many rewards in volunteering, she is by no means the only one benefitting. Audrey Sojonky, a Vancouver committee colleague, sums it up this way, “Tania demonstrated strong leadership ability, balanced with graciousness and a genuine respect for everyone whom she encountered. In my opinion, she is a real gem with a very bright future.”