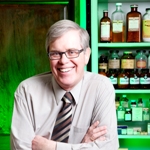 Retired pharmacist Mike Bain Jr. is unassuming in his accomplishments; so much so in fact that his achievements have not been driven by a pursuit for personal success but by his connections and passion.

Mike’s unique contribution to pharmacy in Alberta has been to preserve and celebrate its legacy by establishing the one-of-a-kind Castor Pharmacy Museum in Castor, Alberta.

Family history was a driving force in the creation of the museum. Pharmacy has been the livelihood of Mike’s family for generations; the Bains owned and managed the Castor Drugstore for 62 years. As a legacy to his father, who was also a pharmacist, Mike Jr. and his wife Wendy recreated the Castor Pharmacy circa 1946 in their basement.

What started out as small personal project then grew into much more. “As I was immersed in the history, I really got a feel for what was like to be a pharmacist in a different time. It made me want to show off the profession as it was and how it has developed in time,” says Mike.

The idea surfaced to restore the original pharmacy and open the museum. Mike and Wendy started their labour of love, refinishing 1,000 square feet in 2010. In the spring of 2012 they finished putting the final touches on phase two, almost doubling the museum’s size.

The focus for the museum has changed. Instead of just accumulating items, Mike’s efforts are now focused on telling a story through the artifacts.

Mike’s direct involvement in pharmacy has given him a tremendous amount of knowledge and insight into pharmacy, which he then uses to bring the history of pharmacy to life. When restoring a pharmacy dispensing table, he kept the cigarette burns on the top surface. “I feel like this tells a story of a time and place that is so different from today where now cigarettes are not even sold in a pharmacy, much less smoked in one. These insignificant little marks to some show a change in time, culture and attitude.”

Mike also finds it amusing to look at the past and see how much pharmacy has changed. An example of this is a product he came across – Kellogg’s Asthma relief cigarettes. Now there’s an oxymoron for you!

In 2011, pharmacy in Alberta celebrated its centennial. Throughout the celebrations, Mike played a critical role in promoting pharmacy, not only within the profession but also to Albertans. The Castor Pharmacy Museum was featured prominently in two important centennial publications: the 100 Years of Pharmacy in Alberta commemorative publication and the Alberta Pharmacists’ Association magazine, RxPress. Additionally, Mike and Wendy created a display of pharmacy’s history at the Centennial Conference for Pharmacy in Jasper.

“Without his contribution to preserving our history, there would have been little actual memorabilia to share. Mike was able to make the history of pharmacy come alive for centennial and served our profession extremely well by using his museum to promote the profession and the role of the pharmacist,” says Centennial Chair Jeff Whissell.

As pharmacy in Alberta heads to unchartered territories, it is important to take a moment to look back and see how far it has already come. The Castor Museum is not just full of relics, and Mike Bain is just not a treasure hunter. Together, they preserve the rich history of pharmacy and showcase the evolution of a profession.