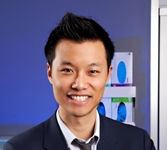 Ernest Law is convinced that his career as a pharmacist is a product of positive reinforcement and excellent mentorship. Though he always imagined that he would work in healthcare, he was initially overwhelmed by the number of options available. A close friend and fourth-year pharmacy student, Kit Poon, became one of Ernest’s earliest mentors, answering his questions about pharmacy education and reinforcing Ernest’s idea that he might like to become a “drug expert.” A few years later in 2009, Ernest graduated from the University of Alberta with a B.Sc. Pharm.
Though Ernest was forewarned about it during his years at the university, his biggest challenge upon entering clinical practice was the realization that there are no truly black and white situations in healthcare. Facing patients with varied and sometimes complicated histories made it obvious to Ernest that patient care was more than following a step-by-step process or set of guidelines. Ernest’s early mentors during his residency and beyond helped him build his confidence in gathering evidence and creating the best possible tailored care plans to treat the patients he encountered.
Ernest now works in the Cardiac Intensive Care Unit at the Mazankowski Alberta Heart Institute (MAHI), where he has opportunities to collaborate daily with other healthcare professionals. He is adamant that a cohesive team, where each member is focused on the common goal of doing what is best for the patient, produces a better outcome for the patient.
“Sometimes there is an impression that pharmacists work alone, in isolation,” says Ernest. “But, that shouldn’t be the case. So much more is accomplished when you collaborate. Coming together and solving problems, no matter how small and no matter how you do it, even if it’s just a system issue—this is what gives me the most satisfaction in my career. This is what really drives me.”
Considering some of the initiatives Ernest has been a part of, his love of problem-solving is readily apparent. He saw a problem within his patient care unit, and submitted an idea for a research project to the residency research program, and when it was accepted, he served as preceptor for the project, which evaluated current practice and outcomes of anticoagulation during intra-aortic balloon pump therapy. Ernest was also part of a team that worked to improve documentation within the coronary care unit at the MAHI by implementing an electronic note/form.

He’s currently working on initiatives that would see pharmacists more involved with medical resident orientations in the cardiology department, with the goal of forming a dialogue between these two disciplines early on. Ernest also participates in and facilitates many monthly journal clubs within the MAHI pharmacist team, which helps team members understand new clinical trials and addresses clinical questions that come up within the group.
Ernest’s takes his collaborative efforts outside of the workplace as well. He excelled in a leadership role as 2011 Chairperson of the CSHP-AB Education Committee, a role he will undertake again in 2012. Ernest is also part of a group of individuals with varied backgrounds (hospital, independent pharmacy, corporate, banner, PCN, students) who are working to create an online community for Alberta pharmacists called PharmBase.
He also assists with lectures and seminars at the Faculty of Pharmacy and Pharmaceutical Sciences (as a case facilitator for PHARM 489: Advanced Therapeutics and guest lecturer for PHARM 367: Cardiology). Hoping to promote open dialogue, share his experiences, and inspire others, Ernest mentors high school students, pre-pharmacy students, pharmacy students, and residents.
“Connections with mentors and preceptors are important,” says Ernest. “I wouldn’t be as motivated or inspired as I am without having had these connections. My career so far has been a product of positive reinforcement from the individuals who took the time to explain things, give me advice, and mentor me. This is why I’m successful.”
As for the future, Ernest was recently accepted into the Doctor of Pharmacy program at the University of British Columbia Faculty of Pharmaceutical Sciences, where he’s eager to “feel like a student” again. Meanwhile, Ernest continues to model his practice and approach to both patients and colleagues after his own positive experiences with mentorship and open dialogue.
“Wherever I am in my practice, I want to feel like there is always more to learn,” he says. “At the same time, I want to continue to teach and to give back, much in the same way that I’ve been taught and mentored. Advice is one of the most valuable things you can receive—and provide.”
Privacy | Site Map | Disclaimer | Contact
© 2020 Alberta College of Pharmacy (ACP). All Rights Reserved