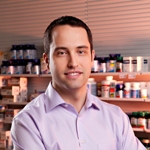 As a teenager interested in health and sciences, Jeff Schlotter always saw himself working in the healthcare field, but wasn’t sure in what capacity. While in high school, Jeff was walking through the local drugstore with his father, who suggested a career as a pharmacist.
Years later while completing his first year of studies at the University of Regina, Jeff recalled his father’s suggestion. He consulted with friends already enrolled in pharmacy. Their stories piqued his interest. He then visited local pharmacists to get a sense of whether it would be a good fit.
Soon Jeff was convinced, and transferred to the University of Saskatchewan to begin his pharmacy education. He earned his B.S.P. in 2007, and moved to Alberta to begin his career in a community pharmacy setting.
What surprised Jeff most about working as a community pharmacist was the difference between what he thought he’d be doing and what he actually ended up doing at work. While his education prepared him well to become an excellent clinical pharmacist, the pressures of shift work and performing tasks according to corporate benchmarks were unfamiliar and challenging.
Other pharmacies in the same building specialized in geriatric and long-term care. This serves as Jeff’s first exposure to this type of practice. He was curious about the work that the geriatric and long-term care pharmacists did: leaving the pharmacy to see patients, traveling to different facilities, being on-call, and working with a diverse team of healthcare professionals. Ready for a new challenge, Jeff moved to Edmonton and began work in long term care pharmacy. He is now a Clinical Geriatric Pharmacist with Rexall Long Term Care.
“Working in this practice team scenario and working with the staff members at long-term care facilities gives me a great sense of satisfaction,” says Jeff. “You get to meet others who think differently than you do as a pharmacist—they have different points of view and understandings about healthcare. You get the best out of each other, working in this type of environment. I’m in a very fortunate position.”
Jeff collaborates with therapists, dieticians, nurses, educators, physicians, and other healthcare practitioners to provide excellent care to the patients he meets. The teams meet regularly to discuss all aspects of a patient’s treatment and care—diet, medications, therapy, and more. Each healthcare practitioner shares his or her expertise openly, allowing the team to make informed decisions and to increase each member’s knowledge of the basics of other disciplines. Jeff feels that this open, collaborative model allows the team to optimize their patients’ treatments.
Inspired by both his patient base and pharmacist colleagues, Jeff obtained his Certification in Geriatric Pharmacy (CGP) through the American Society of Consultant Pharmacists in March 2010.
“Prioritizing your life to be the best pharmacist you can be is a challenge,” says Jeff, though it’s a challenge he excels at. In addition to completing the CGP certification course, Jeff earned a Certificate of Achievement from ACP for his commitment to lifelong learning in pharmacy.
Because he enjoys working in a collaborative setting, Jeff sees himself working in long-term care for years to come—perhaps soon in an expanded role.
“Pharmacists’ eligibility to prescribe will help our roles evolve; we’re moving towards new and improved models of patient care,” says Jeff. “In five years, I see myself still working in long-term care, working closely with other practitioners. This type of practice setting is very motivating.”
Jeff is currently involved in a committee headed by Alberta Health Services that is looking to update clinical practice standards for elderly residents with diabetes in long term care. The team will review new evidence and practices being implemented across the country and around the world. These new clinical practice standards will serve as a guideline for practitioners across the Edmonton region with respect to caring for elderly diabetic patients.

Jeff would like to see pharmacists more involved in initiatives such as updating protocols and processes—even if they’re not specifically drug-related. After serving on an interdisciplinary team responsible for updating the internal warfarin protocol, it’s clear to Jeff that one of the most effective ways to improve process is to draw upon the knowledge of and facilitate communication between all of the healthcare professionals involved.