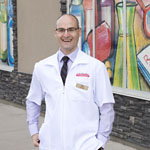 “Recently, when my husband was discharged from hospital, new prescriptions were faxed to his pharmacy. Because it was late in the day, I chose to wait til the next business day to have the prescriptions filled. Even though the pharmacy was closed the next day (it was Remembrance Day), Jody came to my home that morning to see if we needed any medications. It was a pleasant surprise to see him and yet I wasn’t really surprised at all! This is just who Jody Keller is.”

“I have done a lot of medical work, not only in Canada but also in other parts of the world, and in my opinion Mr. Keller is one of the best pharmacists that I have ever worked with.”

“The way that I perceive it, being a pharmacist is not only a job for Mr. Keller. It is a calling.”

These are excerpts from only three of the numerous testimonials submitted to recommend Jody Keller as the M.J. Huston Pharmacist of Distinction. All the submissions reflected the tremendous character, commitment, and care he brings and provides to his patients.

Jody is the owner of two successful pharmacies in central Alberta. Throughout his career, his openness to change is what has propelled Jody to be a leader in his profession. Whether practising in the NWT, Australia, or Alberta, he uses each experience to learn and grow professionally.

Jody says a monumental moment in his career is when he accepted a position with Didsbury Pharmasave. Owner Margaret Baril, a past M.J. Huston award winner, was an amazing mentor to Jody. Having the opportunity to mirror Margaret’s skills in community pharmacy provided Jody with a springboard for his own career and broadened his understanding of the importance of relationships with patients and collaborating with other professionals.

Options for patients in today’s world can be limitless. However, rural living can bring frustration with limited healthcare choices. Jody recognized this and has developed a very forward-thinking approach to pharmacy to ensure that his patients don’t want for anything.

In July 2004, an opportunity was presented to purchase a Carstairs pharmacy. Jody felt that the stars aligned; he had worked relief at this store and remembered thinking it would be a great store to own one day. He and his wife had also just had their second child (they now have four!) and wanted to put some roots down.

The Carstairs pharmacy started growing immediately, largely because of Jody’s passion. “I am always looking for new services to provide to our customers, the latest training for staff, and more efficient procedures to improve our effectiveness. There is nothing more gratifying than seeing the positive impact this has on patient outcomes, work flow, and staff growth.” In 2009, he built a new pharmacy, praised for aesthetic appeal and being an eco-friendly building. His design also included an adjacent space for a wellness clinic, which houses alternative health practitioners.

Jody’s fellow pharmacist, Wade Mannle, remarks, “I was, and still am, amazed at the scope of healthcare services that Jody had the foresight and courage to incorporate into a community pharmacy.” Since opening its doors, the wellness clinic has offered many services such as a naturopathic doctor, traditional Chineses medicine, FirstLine therapy, massage therapy, and pharmacists offering hormone replacement therapy, injections, mindfulness, exercise consultations and specialized health counselling.

Jody is a certified FirstLine Therapy Healthcare Professional, has his injection authorization, and is a compounding pharmacist, trained at the Professional Compounding Centers of America. In addition to his pharmacies and the wellness clinic, he established a compounding facility. This commitment is not only meeting the needs of his customers, but those of many veterinarians, dentists and other neighbouring pharmacies.

Reaching out to his communities and colleagues and extending knowledge and education is important to Jody. He promotes pharmacy in the media, through features in Pharmacy Business magazine and “Ask the Pharmacist” articles that offer advice to the public on health concerns. Hosting public information sessions after store hours, in-house webinars for doctors to learn more about services available to them, and presenting within doctor or dental clinics on advanced topics are all part of Jody’s repertoire. He mentors pharmacist and pharmacy technician students. He has met with his MLA to discuss pharmacy issues. Jody walks in the business districts in both Carstairs and Didsbury, introduces himself, and talks about pharmacy. He has also taken on national leadership roles by being involved in vendor contract negotiations and sitting on the Western Pharmasave board.

When Jody purchased Didsbury Pharmasave from his mentor, Margaret, in 2010, she recalls that, “The transition was far easier for me knowing that my patients would be well cared for by someone like Jody.”