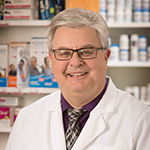 
“In the many years I have known him, his zeal and attachment for the profession of pharmacy and to his community has not diminished—it has grown,” says nominator Neil Cameron about this year’s Pfizer Consumer Healthcare Bowl of Hygeia recipient Robert (Bob) Mattice.

Bob has been a pharmacist in Alberta for 34 years and has owned and operated the Grand Centre Value Drug Mart in Cold Lake for 26 years. He will be the first one to tell you that living in a small town has its rewards but also its responsibilities. His personal belief is that one needs to give of themselves to the place they live, especially if in a professional vocation.

“Communities give people a sense of belonging and identity. I saw how my parents were involved with service clubs or school activities to make where they lived a better, safer place. I feel it is our responsibility to do the same thing and I often say ’bloom where you're planted,’" adds Bob.

Through the years, Bob has been an extremely active volunteer involved in many different sectors. He has held director positions for the RCMP community liaison committee, the local physician recruitment committee Hearts for Healthcare, the Pirouette School of Dance, the Chamber of Commerce, and currently serves on the Cold Lake Ambulance Society Board. With his wife Joanne, he started a chapter of Canadian Parents for French to support French Immersion within the school system. On a yearly basis he organizes Santa Claus pictures and also fills in for Santa from time to time.

“Volunteering in the community has allowed me to meet new friends and connect with others at a different level. I feel it has dispelled some of the notion that pharmacists are serious and stuffy all the time.” He jokingly adds, “I am glad I own my store as I would probably be fired for the volunteer work I do while at work!”

A part time comedian, Bob believes in the power of humour. Every day he is looking to have a laugh, make someone laugh or just to see someone be put at ease when Bob tells a joke or two. He also gives back by using his comedic talents. He has volunteered countless hours as an emcee and comedian for many charity events at a discounted, or entirely donated fee.

Bob also feels it is important to give back and support the pharmacy profession. When CFB Cold Lake was short a pharmacist on their base, Bob stepped up and helped them maintain pharmacist and pharmaceutical services for a period of six months until CFB Cold Lake was able to resolve their pharmacist shortage. This was in addition to his duties at his own store.

He currently serves on the Value Drug Mart Board of Directors and is also a preceptor for the University of Alberta pharmacy students. He has been a guest speaker at Portage College speaking in the areas of Methadone and drug addiction. He has also hosted kindergarten class tours of the pharmacy.

What makes Bob a true philanthropist is the selflessness that motivates him to give back to the community.

Bob elaborates, “The hugs I get or when someone says, ‘wow no one has ever done that for me before;’ that is the only acknowledgment I need.”

Back to APEX Award main page