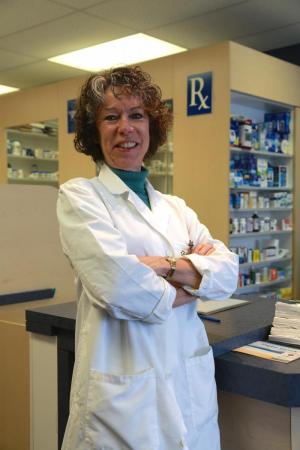 Dr. Charlotte Jones is along-time friend of pharmacy. Though she currently works as an Associate Professor at the University of British Columbia’s Faculty of Medicine, Charlotte spent much of her career here in Alberta. Over the years, Charlotte has been involved in many studies and projects that involved collaboration with pharmacists.

“I first met Charlotte when she was completing her specialist education in endocrinology at the Calgary General Hospital in the late 1980’s. I was immediately struck by her warm and generous personality and amazing intellectual abilities,” says Donna Galvin, a now retired Alberta pharmacist who nominated Charlotte for the award. “She was very interested in our role as clinical pharmacists on the medical teaching unit, and we had many frank discussions about teamwork even then. She was always supportive of the pharmacist’s role. We became respected, collaborative colleagues and great friends,” she adds.

An avid supporter of health promotion and disease prevention, Charlotte hired Donna to help author a series of seven booklets for the Calgary Regional Health Authority called ‘Creative Lifestyle Changes’ to be used in the Hypertension and Cholesterol Centre. For the next decade or so, Charlotte and Donna continued to team up on research projects and focused their efforts on the promotion of maintaining a healthy lifestyle instead of focusing on illness repair. With each successive project, they worked hard to include and expand the role of community and hospital pharmacists.

One project in particular was A-CHAMP (Airdrie Cardiovascular Health Awareness and Management Program) in which family physicians and pharmacists in the community of Airdrie as well as their patients, nurses, community organizations, public health representatives and volunteers, worked together to create a team-based approach for preventing heart disease and stroke in Alberta. The program was a success and later became province-wide.

“Dr. Jones has been a strong supporter and collaborator in pharmacy practice research with our group. She was an active co-investigator on the SCRIP-HTN study (McLean DL, et al, Arch Intern Med 2008), a randomized trial of pharmacist and nurse intervention in patients with diabetes and poorly controlled hypertension,” says Dr. Tsuyuki.

Charlotte’s impact on pharmacy practice extends far beyond her own work as she continues to inspire the next generation of physicians in her role at UBC. “I encourage my students to keep their eyes and minds open for the talents of other healthcare providers, pharmacists in particular. When possible, make sure to include them in patient care both in the community and in acute care. Be mindful of their expertise and make patients aware of the benefits of including other providers in their care. Be sure to communicate with everyone on the team, learn from them, and teach them. Be partners in care.”