Be warm, smile, and listen: How pharmacy professionals can help with drug misuse 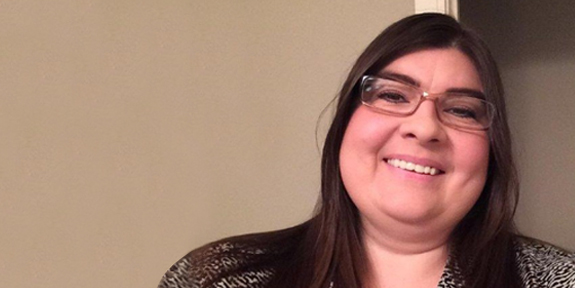 Pamela Spurvey, a Peer Support Worker with Alberta Health Services, was a guest speaker at ACP's first Leadership Symposium this past April in Calgary.

For most of her adult life, when Pamela Spurvey walked into a pharmacy, she didn’t feel welcome. She could tell by the body language and facial expressions of those behind the counter that she was being judged.

Pamela had been struggling with mental health issues and drug addictions.

“You feel stigmatized,” said Pamela (pictured above). “You're already feeling bad things about yourself and now you’re feeling them from that person standing in front of you. That makes it even harder to ask them for help or support.”

Recently, Pamela celebrated 10 years of sobriety. She has literally turned her life around and is now a peer support worker with Alberta Health Services and a mentor with the Edmonton Drug Treatment Team.

In April, she was asked to share her story at ACP’s first Leadership Symposium and encourage pharmacy professionals to re-think how they deal with individuals who misuse drugs.

Pamela’s story is both heart-wrenching and inspiring.

Growing up, she was surrounded by addiction, and mental and physical abuse. As a teenager, despite excelling in education and sports, she was forced to quit school and get a job to help support her family. Eventually, she fell into a self-destructive lifestyle. Drugs. Crime. Teen parenthood. Every now and then, she would get a wake-up call and try the straight and narrow.

Each time she failed.

You get used to the chaos and that disabling lifestyle.

“How could I have a normal lifestyle when I didn’t know what that was?" she said. "When I tried to normalize, I felt uncomfortable and that I didn’t deserve it, so I would go back to these dark places. That’s where I felt I belonged.”

Authority figures constantly told Pamela to clean up her act and take specific steps to do it. Problem is, she wasn’t ready. Eventually, though, she got there.

“I got tired of feeling hopeless and sad all the time,” she said. “Self-hatred. Feeling judged. Anxiety. Fear. Not being trusted. Seeing my children suffer. Feeling defeated. The biggest part was when my own child had to start taking care of me. I was homeless, sleeping on my oldest son’s couch. He was the caregiver because I was sick from my own drug misuse. That just didn’t feel right. I wanted to be well.”

Helping hands on the journey to recovery

When she was finally ready to get help, Pamela was given choices how to set out her recovery journey. That made all the difference. Pamela believes that as front-line health care professionals, pharmacy technicians and pharmacists have a genuine opportunity to make a difference for those who misuse drugs.

“You’ve got to see beyond the drug misuse and have an honest conversation with that person,” she said. “Find out what’s really happening with them. It’s incredible what you’d see. It would open a lot of doors.”

You can even help by simply explaining important points about their prescriptions and not making assumptions. Pamela recalls many instances when prescriptions weren’t explained to her.

“I didn’t know that if I stopped taking my anti-depressants for four days, then start them again, and then not take them for another few days that I was causing a chemical imbalance in my brain,” she said. “I was causing my depression to go all over the place. I was making things worse for myself. Nothing was explained to me. When I got the right pharmacist and all those things were explained to me, I was like, ‘Oh! I didn’t know that.’”

Her final piece of advice to pharmacy professionals is to be warm, smile, and listen.

“If you listen to someone’s story, you’ll be able to see their potential. They can’t see it in themselves sometimes.”

Because someone finally listened to Pamela and saw her as a person, a mom, a member of the community, she was able to realize her full potential and make a difference for so many others.