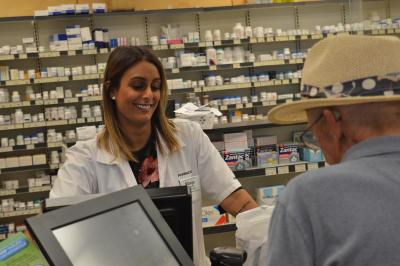 When Manju Nagra walks into the Magrath Save-On-Foods pharmacy in Edmonton each day—as she has for the last 10 years—she does so with a smile on her face. Why? Because Manju sees those who visit the pharmacy as not just her patients, but as people.

“I truly love my patients,” said Manju, a graduate of the University of Alberta, adding that most of her patients are regular visitors to the pharmacy, and she knows virtually all of them on a first-name basis. She loves the fact they put so much trust in her.

“A lot of them phone us to get another opinion after seeing their doctor,” she said. “You can make a difference. And we have a good relationship with our physicians. A lot of doctors call us for our suggestions. They refer patients to us. That is really rewarding.”

Manju believes people trust her because she genuinely cares about everyone who approaches the pharmacy counter.

“People don’t come to see me because they’re feeling well,” she said. “If I can give them that extra compassion and empathy, and just listen, that makes a big difference. Most people would be somewhere else if they could—they don’t come to the pharmacy by choice. If you don’t care about them, it gives them one extra stress they don’t need.”

“My grandmother was sick in February,” she said. “After spending some time in the hospital, you realize what you like in a professional and what you don’t like. We did have some negative experiences in some units. It reinforced the idea that this isn’t how I want to practice. Extra support and compassion is helpful, compared to not caring.”

Manju believes her instinct to care about others comes from growing up with her grandparents. It’s in her nature. She also believes that truly caring about others is something that can’t be taught.

There is a downside to caring. Once you become close to someone, you can care too much, which makes the hard times even harder.

“I cry a lot when patients pass away,” she said. “I’ve probably been to 15 funerals of patients. Sometimes you get too attached. But it’s better than not being attached at all.”

Manju goes through the same struggles as other pharmacy professionals—busy workflow, pushback from health professionals who are hesitant about the pharmacist’s role—and does her best to work through them. Once, she was contacted by a physician who questioned her adaptation of a prescription. She explained why she made the change and noted that she would follow up with the patient in three, seven, and 10 days. Manju’s explanation put the physician at ease.

“Good communication is so important,” she said. “Many health care professionals aren’t familiar with what the boundaries are for pharmacists, so every now and then we need to explain that we only prescribe or adapt within our scope of practice. If I’m unsure, I’ll call a colleague and get a second opinion.”

As new challenges arise, Manju believes they can all be dealt with by putting the patient first.

“Every little thing you do could mean the world for the person in front of you.”