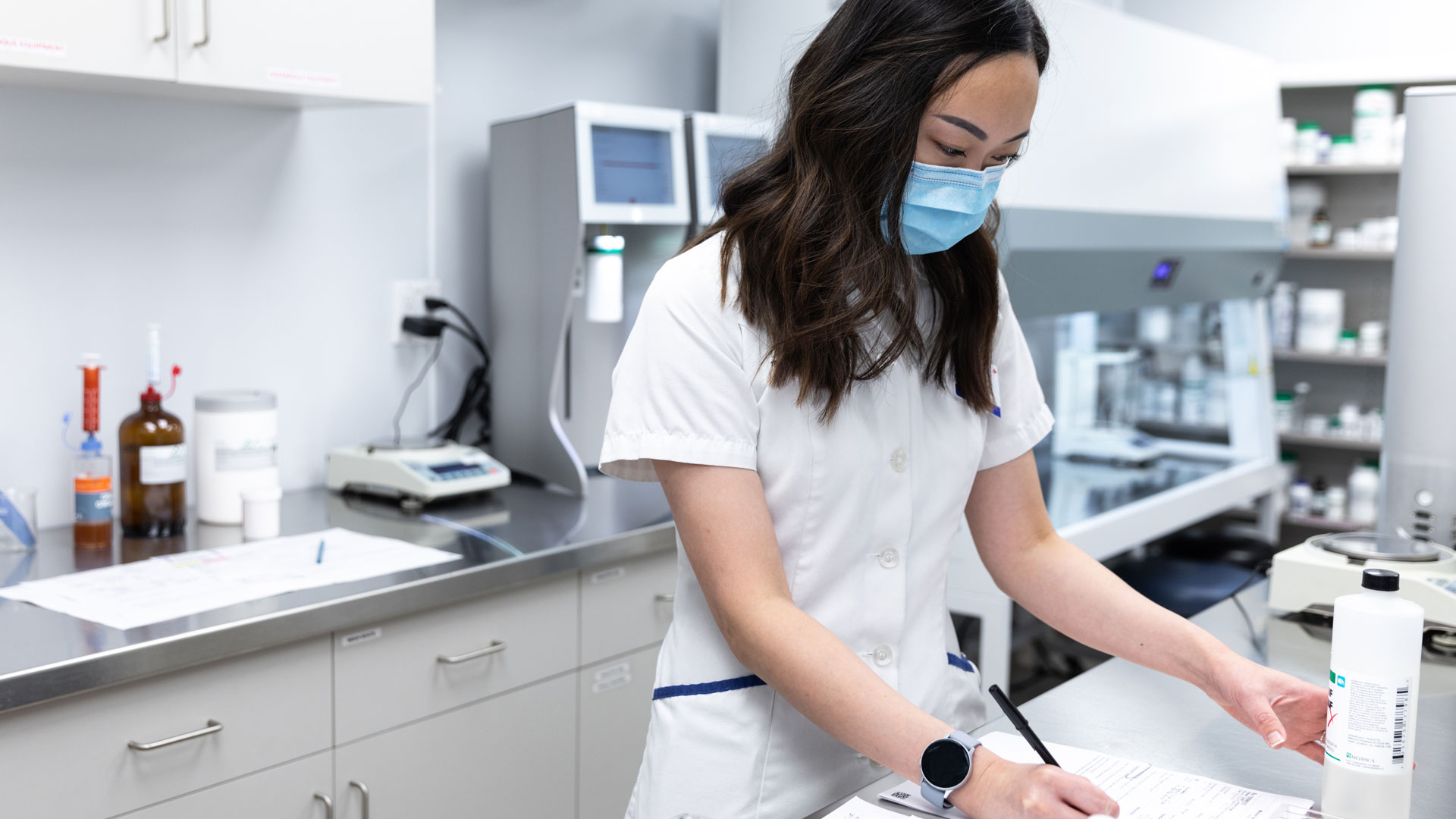 Annie Chong and the team at London Drugs are a compounding success story.

Annie Chong is the compounding supervisor for London Drugs at North Town Centre in Edmonton. Two years ago, Annie and her team embarked on a project to re-design and renovate their compounding space to meet ACP’s Standards for Pharmacy Compounding of Non-sterile Preparations. The new compounding space passed its renovation inspection in June 2021.

“Before, it was just an empty space,” said Annie. “We were compounding there before. We had a fume hood, but aside from that, there wasn’t any other specialized equipment. Everything you see here now is new.”

Annie and her compounding team worked together to design the new space. Since they had already done a significant amount of compounding, the team knew what would work for them and tried to incorporate that into their new compounding room to maximize workflow, efficiency, and safety. They found that previously, washing dishes took up much of their time, so they installed an industrial dishwasher. They also upgraded their Containment Primary Engineering Control (C-PEC) device and added significant cupboard space.

“Nothing can be in boxes, so having storage space for everything was very important for us,” said Annie.  They also incorporated an island in their compounding room. “We like the central island. We needed a lot of drawer space so we could put all of our equipment there. Each workstation has its own equipment so one person can compound on one side and another person can compound on the other side.”

The compounding team also put a lot of effort into reading and re-reading the standards before writing the pharmacy’s compounding policies and procedures.

“We spent quite a bit of time ensuring that everything that we had in our new policies and procedures were compliant with the standards,” said Annie. “It’s just easier when everything is organized. We have different binders all organized and labelled so if we need to look back on things we know where everything is.”

Today, Annie’s team provides Level-C compounding services to London Drugs pharmacies across Alberta. Their pharmacy has a compounding and repackaging licence and has entered into the necessary agreements with all of the pharmacies they serve and support. Having a newly renovated compounding space that is compliant with the standards has not only made the compounding team more efficient, they also feel safer, specifically when dealing with hazardous drugs.

“You don’t want to bring these chemicals back home,” said Annie. “You want to make sure that everything you do, especially if it’s hazardous, is enclosed in that room.”

In the end, practising to the standards is making a tremendous difference for both team members and patients, who appreciate the consistent quality of the products being compounded in the new lab.

“Everybody really loves working in the new area,” said Annie. “It looks really professional. We get a lot of compliments from patients who are outside and can see the room in the back. They like that they can see the room. It’s very clean and organized. It gives them reassurance that their product is being made in a controlled environment.”