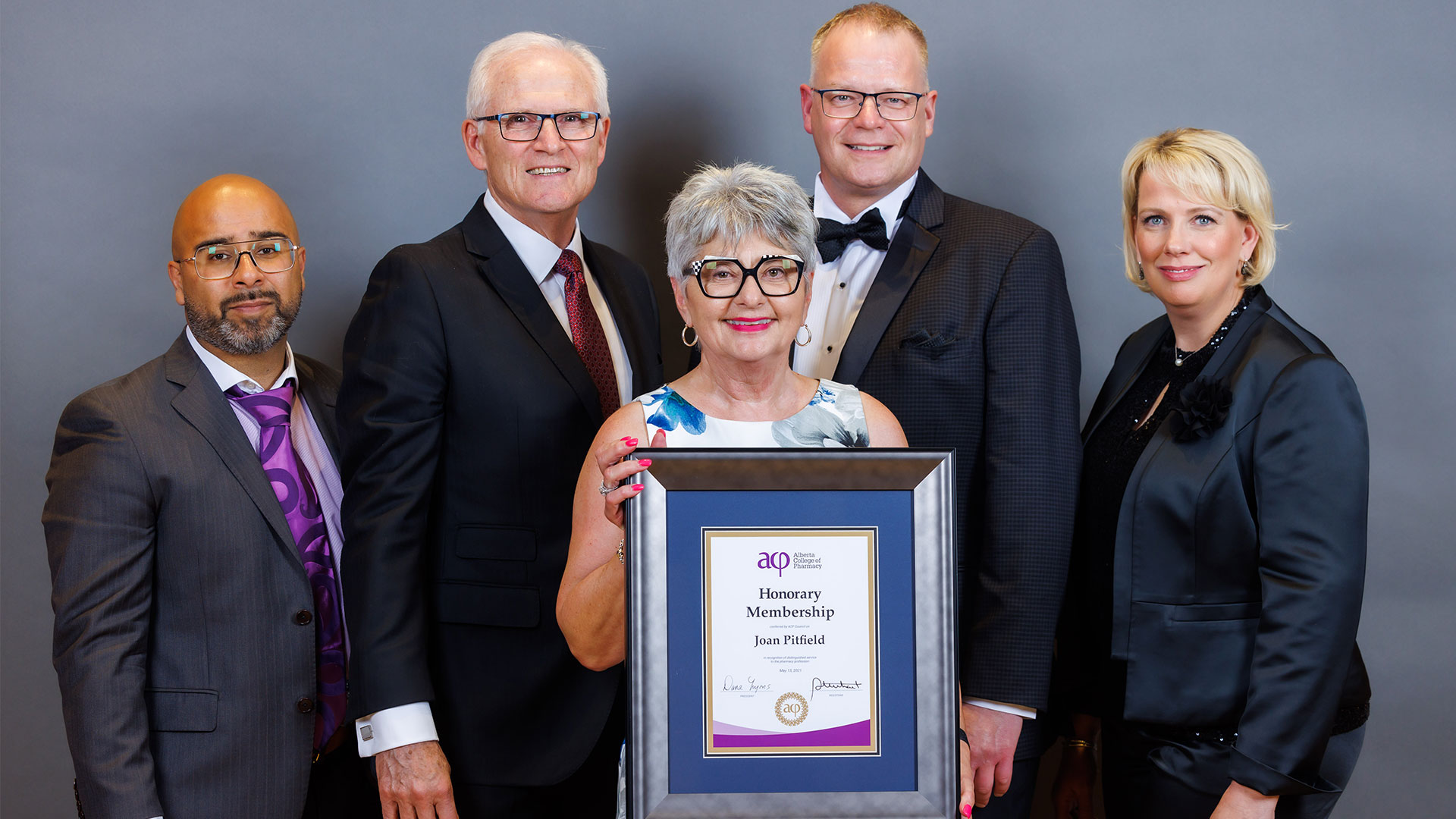 This award honours her service to pharmacy and her distinguished community involvement.

In June, the Alberta College of Pharmacy (ACP) held its first Celebration of Leadership event since 2019. At the event, Joan Pitfield was posthumously awarded Honorary Membership. This award is presented to an individual who has never been a regulated member and has, in the opinion of Council, rendered distinguished service to the practice of pharmacists or pharmacy technicians.

Patricia (Pat) Matusko, who nominated Joan for this award in 2021 prior to Joan’s passing, reflected on Joan’s contributions to pharmacy.

Pat got to know Joan through their time serving together on ACP’s Council. Joan served as a public member on Council from 2005 to 2011, bringing her expertise from her career as a lawyer and her passion for community betterment. Pat says when she reviewed the Honorary Membership award criteria last year, Joan’s name was the first one that came to mind.

“Joan inspired me. She worked hard, using her expertise in law and her involvement in the community to advocate for Albertans,” said Pat. “She always brought her vigour and her empathy to the table.”

During Joan’s time on Council, important initiatives were underway, including the development of Standards of Practice for Pharmacists and Pharmacy Technicians and the Code of Ethics. Joan’s contributions from a public perspective were instrumental, as was her deep community connection and her commitment to the Albertans she represented.

“Joan invariably would present the opinion of her public, even if it was not her own,” Pat explained. “She could debate a point as the public would.”

Joan and Pat also sat on the Appeal Panel of Council, which reviews disputed Hearing Tribunal decisions. Joan’s legal expertise was invaluable and she was always willing to share her knowledge and her passion for justice. Pat says that, for Joan, the protection of the public was always front and centre.

Pat recalls that Joan worked diligently in any role she took on.

“In her determined, quiet way, Joan brought enthusiasm, integrity, and an ethical responsibility to the Council table, with an unwavering commitment to the health of Albertans,” she said. Pat reflects that, when presented with a difficult but conscionable course of action, Joan would pose the question, “How could we not?” That is to say, in her eyes, there was never a true alternative to making the right decision.

Pat was honoured to accept Joan’s award on behalf of her colleague and her friend. Joan’s leadership was instrumental during a critical phase of pharmacy’s history in Alberta and her distinguished service has left a lasting legacy on the profession of pharmacy.