Leading with kindness and connection 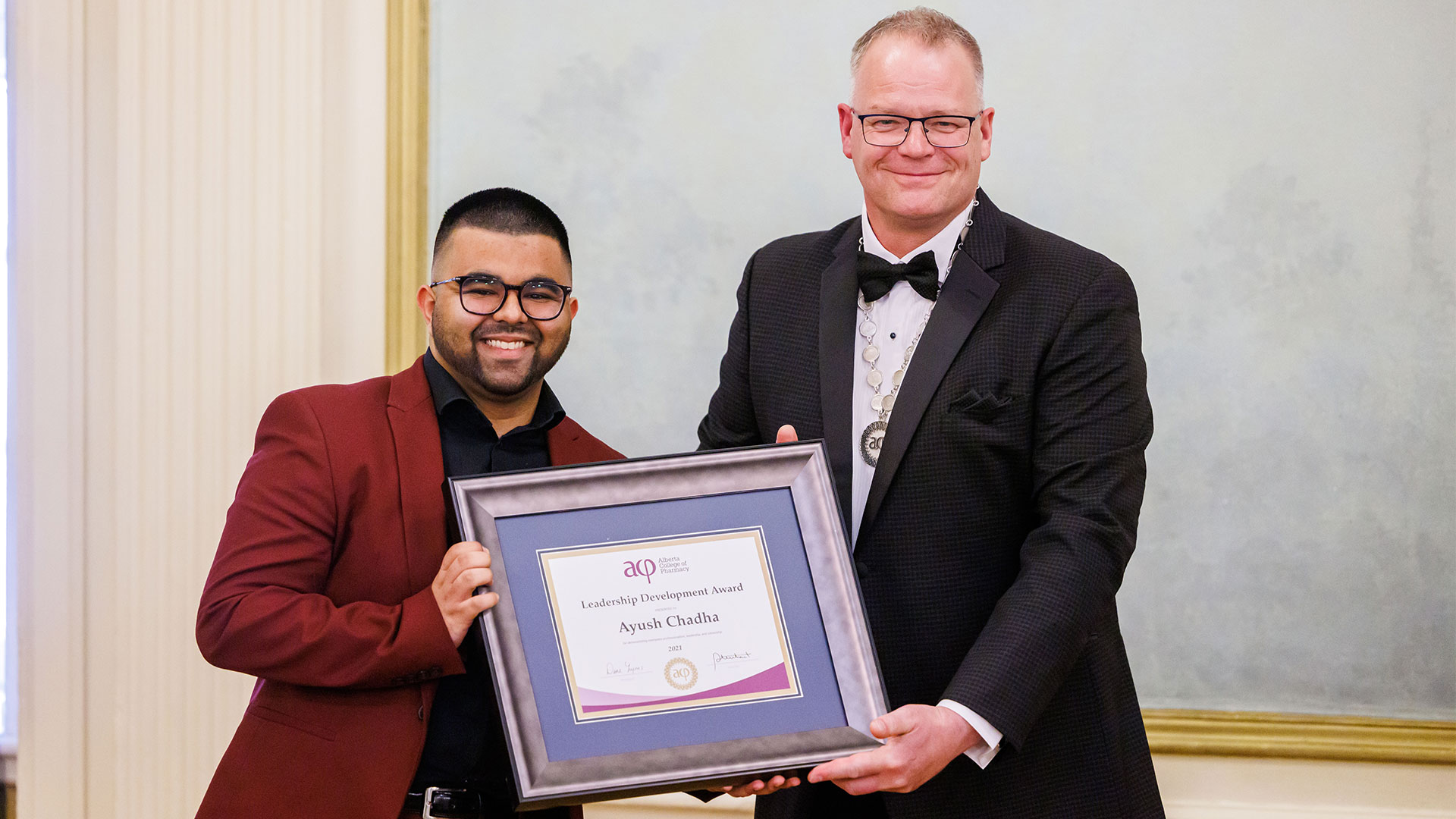 On June 8, 2022, the Alberta College of Pharmacy (ACP) held its first Celebration of Leadership event since 2019. At the event, three University of Alberta students were presented with ACP Leadership Development Awards, including 2021 recipient Ayush Chadha. These awards are presented to a third- or fourth-year student in the University of Alberta’s Faculty of Pharmacy and Pharmaceutical Sciences who has demonstrated exemplary professionalism, leadership, and citizenship.

Ayush’s passion for leadership and volunteerism has always been a key part of his identity.

“I was born in Moscow, Russia, and moved to Canada when I was in grade four,” he said. “I’ve always been involved in student leadership initiatives, partly to give back to this country that has given me incredible opportunities.”

When Ayush entered the pharmacy world as a student, he noticed a lack of diversity in healthcare leadership.

“I noted that there were few leaders who looked like me,” he said. “I felt it was important to take on leadership roles so that students who come after me can see themselves represented and can hopefully have the confidence to find their own opportunities to lead.”

Ayush was elected by his peers to serve as both a Canadian Association of Pharmacy Students and Interns (CAPSI) representative and an Alberta Pharmacy Students’ Association (APSA) council member. He sat on multiple committees and led initiatives that focused on inclusion, including a panel event focusing on women in pharmacy leadership and the Race against Racism alongside Navjot Singh to fundraise for Action Dignity, a charity in Calgary working to enhance the voices of ethno-cultural communities.

“To me, leadership is not about being in charge but rather taking care of those in your charge,” he said. “Our class had a mantra of ‘no one left behind,’ and I am grateful to be graduating with an incredible cohort who will continue to shape the pharmacy landscape in the years to come. Behind my accomplishments are my peers, my family, my faculty, and other leaders in the pharmacy sector who have provided me support and inspiration.”

Ayush said his strong mentorship connections and peer relationships gave him the willingness to “be a little bit uncomfortable and take more chances,” explaining that his peers and mentors inspired him to apply for the Leadership Development Award.

“I was grateful to have support and encouragement from my mentors, including professors and preceptors,” he said. “The previous award winners also inspired me; I look up to Jes Buhler and appreciate all that she has and continues to do for students and the profession.”

Ayush hopes that his story inspires other students; he encourages his peers to follow his lead by leaning into the supports that are available, building connections with other students, and finding mentorship opportunities.

“I would encourage current and prospective students to use your time in school to explore all of the opportunities that pharmacy offers you,” Ayush said. “This is an opportunity to find what drives you and expand your horizons.”

As part of his Leadership Development Award, ACP will contribute $5,000 to allow Ayush to attend a conference or symposium of his choice. He plans to use the opportunity to refine his skills in initiating difficult conversations and learning how to change policy and procedures at a large scale.