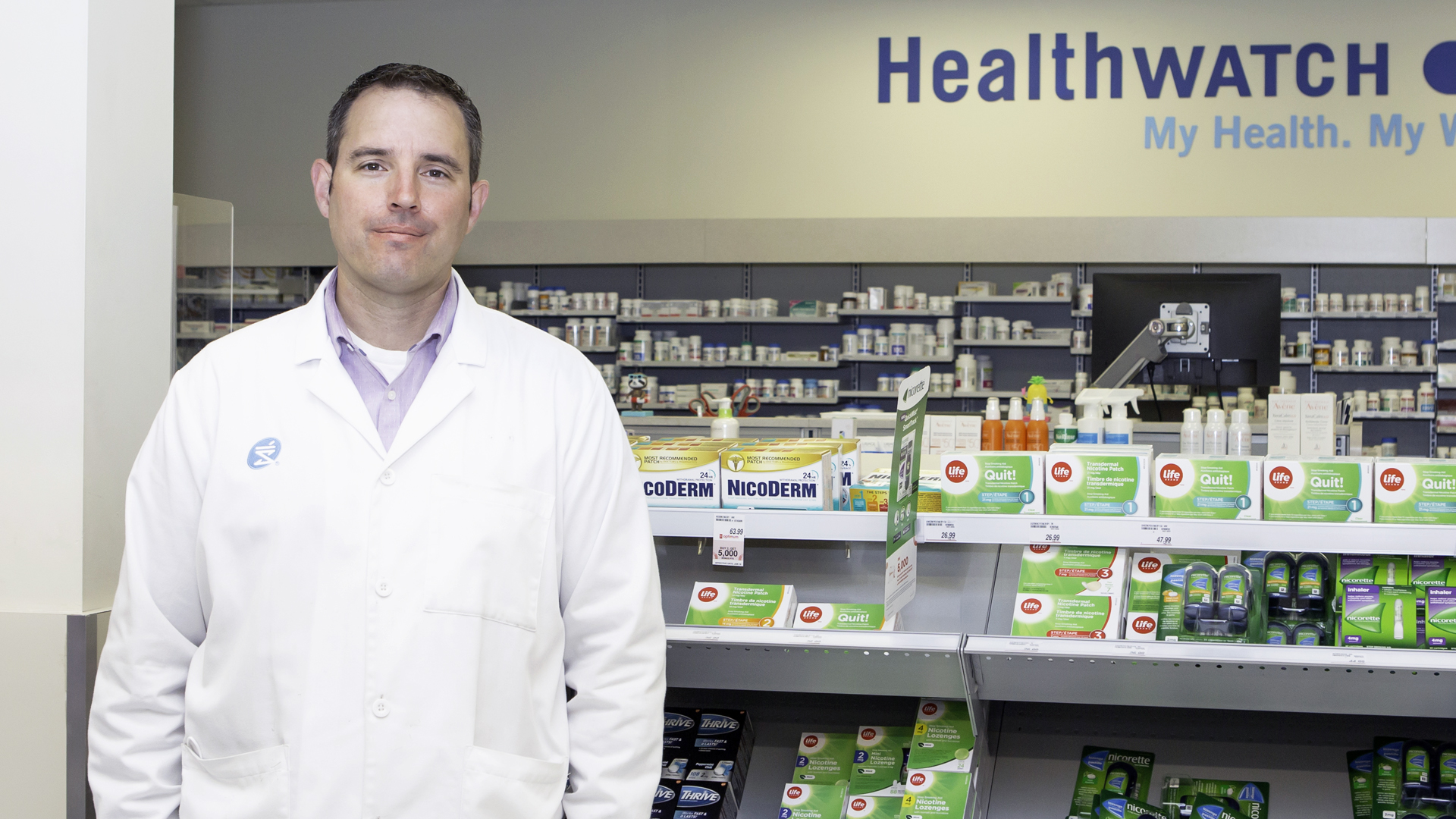 With the clock ticking, a Lethbridge pharmacist comes up with a way to get a potentially life-saving drug to a child.

While doing some gardening in her backyard, Ashley Haughton turned her back on her son, just over a year old, for a few seconds. When she turned around, she noticed he had something in his mouth—something that looked like a berry. She asked him where he got it. He pointed to a flowerpot. She looked inside and saw what she knew to be raccoon feces.

It’s a good thing she recognized it and knew that raccoon feces can be extremely dangerous if ingested by a human.

Ashley and her husband, Jon Martin, quickly went online and learned more about a roundworm commonly found in raccoon feces called Baylisascaris procyonis. If ingested by a human, the roundworm can cause severe neurological disease or death. There are drugs that can prevent an infection, but drug therapy must occur no later than 72 hours after ingestion.

They called both their family doctor and the Poison and Drug Information Service (PADIS) to get some advice on how to get treatment for their child. The family doctor prescribed the child a single dose of Mebendazole (MBZ) and instructed the parents to watch for any symptoms. However, as the family researched the roundworm more, they learned that once symptoms begin, it’s already too late and no further treatment options exist.

On the suggestion of a public health nurse, Jon took the feces to a veterinarian to have it tested for roundworms. That would give them a definitive answer if their son was at risk of severe illness or even death. The next morning, they got the results.

“The vet said that under the microscope, there were so many roundworms that they couldn’t even count them,” said Jon. “It was completely saturated. We started freaking out, but we knew that if it came back positive, he needed more than a single dose of MBZ. Ashley took our son to the emergency department.”

In the meantime, the family discovered that another drug, Albendazole (ADZ), is the preferred treatment for these roundworms. The problem is that ADZ is not approved for humans in Canada (it is typically used for treatment in animals) and is not readily available. At the emergency department, the doctor agreed that their son needed ADZ as soon as possible, applied for and received special authorization from Health Canada, and wrote a prescription. He also wrote a prescription for 10 days’ worth of MBZ as an alternative. He instructed the family to call as many pharmacies as possible to try to find ADZ while he attempted to get the drug delivered from Ottawa, which would take several days. The clock was ticking; this was already 24 hours after ingestion.

The parents called pharmacy after pharmacy. One pharmacy Jon called was the Shoppers Drug Mart at Park Place Mall. Pharmacist Bryce Barry confirmed to Jon that the pharmacy did not have ADZ.

“I’ve never been so scared in my life,” said Jon. “This is my child and we are basically powerless. It was very stressful.”

The parents concluded that they would not be able to acquire the drug in Canada in time, but it was readily available in the US. They planned to get a note from the ER doctor in Lethbridge, drive to Montana to see a doctor to get an American prescription written, and get the prescription filled there. Because the drugs could not cross the border, Ashley was prepared to stay there with her son for 10 days for the duration of the treatment.

In the meantime, Ashley went to the Park Place Mall Shoppers to get the MBZ prescription filled, even though it wasn’t their regular pharmacy. As fate would have it, Bryce was on shift and, through chatting with Ashley, realized that this was the case involving raccoon feces ingestion. Since Jon had first called him, Bryce had begun researching the matter. A few minutes later, Bryce called Jon at home to let him know that ADZ could be compounded by a pharmacy that has the right ingredients.

“We didn’t know this. This was a substantial moment,” said Jon. “This stranger had figured out a way to get this life-saving drug for our kid.”

Bryce had reached out to a colleague in Vancouver, who had the necessary ingredients to make the drug. The family was prepared to drive to Vancouver to get the medication, but Bryce asked them to hold off until he tried a few more things. Through a pharmaceutical sales representative, he found Script Pharmacy in Calgary had the necessary ingredients and could make it happen. That evening, Bryce got back to the family and said the drug would be ready for them the next morning in Calgary.

“There’s always got to be a way to do things,” said Bryce.

The next morning, pharmacist Aleem Datoo and the team at Script Pharmacy went to work.

“As soon as we opened, Bryce called and filled me in with the details,” said Aleem. “I confirmed we had the formula on file and we could make it. He got the physician at the hospital to fax me a prescription. Once we received the prescription, we got in touch with Ashley. I told her we would have it ready when she arrived.”

After a horrific, stressful two and a half days, the family was able to get the medication their child needed before the 72-hour window expired. The 10-day ADZ treatment has concluded, happily with no symptoms noticed.

“A pharmacist who I had never met took action,” Jon said of Bryce’s efforts. “We’re still not out of the woods. With how the larva work, they could still be in there for a month. He could still end up having symptoms in two weeks if it didn’t work. We’re optimistic. All the research shows that if you can get treatment in less than 72 hours, it’s 95 to 100 per cent effective. Because these pharmacists worked together, using their networks, during their personal time, we were able to get the drug in time.”

The collaboration that took place between the emergency doctor who diagnosed the patient, the veterinarian who tested the feces, the pharmacists who found a way to procure the drug, and the pharmacy technicians who compounded the drug made this all possible.

“A whole bunch of people did a bunch of small things for a big result,” said Bryce. “I used to be a heavy-duty mechanic before I got into pharmacy. It’s like a shop. You’ve got one guy who specializes in engines. He looks at the problem and says, no, not the engine. And that’s the only thing he focuses on. Then someone looks at the transmission and you go through and everyone has their own lens they look through. I think health care is very much like that. It’s helpful to have a different view on things when you’re trying to solve a problem like that.”

Aleem was glad his pharmacy could contribute but is quick to give much of the credit to Bryce.

“Kudos to Bryce—his quick thinking is very commendable,” said Aleem. “This child obviously needed the medication a lot quicker than going through the regular channels. Knowing what he did to get this process going is inspiring.”

Jon is thankful for everyone’s efforts.

“In terms of how effective the health community was to address this super-rare and time-sensitive medical emergency, I’m constantly astounded and amazed that everything happened as quickly as it did,” he said. “I don’t even know how to thank Bryce and the ER doctors for what they did. They very likely saved our son’s life.”

Bryce feels good about making a positive impact with a patient; however, he sees what he did as fulfilling his responsibilities as a pharmacist.

“If someone brings in a prescription, you should see it out to the end,” he said. “It’s my responsibility as a pharmacist to make sure they get help. If you just send them away without any information, I think that’s a disservice. I strongly believe that we need to stick with our patients and make sure they get what they need. We can’t always provide it, but we should find a person who can.”