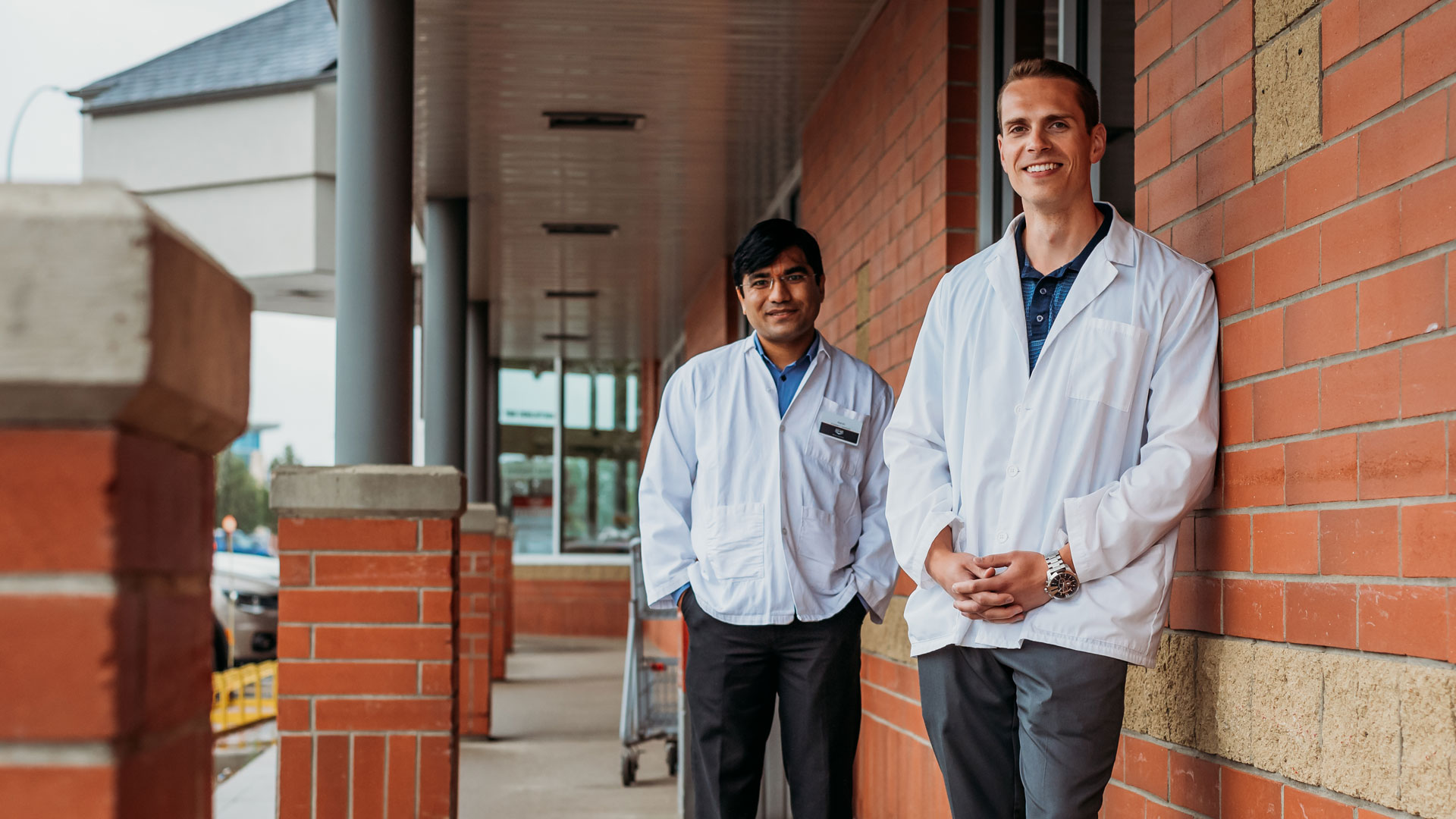 Who helps a licensee create an effective practice?

Being a licensee can be a rewarding experience. It can also be a challenge. A licensee lays the foundation for quality pharmacy practice through leadership, supervision, and mentoring of pharmacy staff. Therefore, it is imperative that the licensee succeeds; but who, or what, contributes to their success?

Curtis Russell has been a licensee for three years at South Country Co-op Limited at 13th Ave Pharmacy in Medicine Hat.

“Being a licensee to me, means treating the profession of pharmacy with the utmost respect,” said Curtis. ”It requires you to ethically lead a pharmacy team with the highest level of accountability.”

Leaders set direction, create an inspiring vision, and set an example for others to follow. Setting a direction will only work if everyone knows their role in the pharmacy and supports one another.

“A successful pharmacy is one where each team member is clear about their roles and responsibilities,” said Tyler Watson, pharmacy practice consultant (PPC) with the Alberta College of Pharmacy (ACP). “When team members know what is expected of them, they tend to complete their work and tasks in an orderly fashion that results in organized workflow and opportunities for better patient experiences.”

Curtis also believes that a pharmacy is at its best when the roles are well defined, and the policies and procedures are all in place that support those roles.

“A patient’s experience would vary greatly without someone setting, managing, and enforcing practice expectations,” said Curtis.

Leading a pharmacy team can be a daunting task. Harsh Patel is a licensee with South Country Co-op at Northlands in Medicine Hat. He says a strong supporting team benefits the licensee and ultimately the pharmacy. Harsh tries to motivate his team by giving them more responsibility, depending on their experience and designation, and encouraging them to practise to their highest potential.

“We develop yearly goals for each employee and give them guidance throughout the year so they can grow themselves in their career,” explained Harsh. “These goals are focused on patient care and best quality customer service.”

Curtis credits his success to the others in his pharmacy and those above him.

“A strong pharmacy team and senior leadership team fosters autonomy in your decision making at the pharmacy level for success. That freedom is important to ensure not all decisions are based solely on the bottom line,” said Curtis.

Having the support of a pharmacy team that believes in and works to achieve the vision of the licensee, enables the licensee to better balance their two roles.

“It can be difficult; you certainly have to strike a balance between the two,” Curtis said. “You do have to set some time aside each week to ensure your responsibilities as a licensee are met.”

A good relationship with the proprietor is also key to a licensee’s success.

From what he has observed in the field, Tyler believes most licensee - proprietor relationships are empowering.

“I’ve seen examples where a licensee wants to offer a new service or implement a more efficient workflow and does so with the support and encouragement of their proprietor’s agent,” said Tyler. “This results in more effective and successful practice change that ultimately serves patients better. The success of such endeavours results from open and transparent communication as well as a shared vision about the benefit of the proposed changes.”

There can be friction between a licensee and a proprietor. Kiran Juma (another PPC with ACP and a former licensee) notes that a common source of friction stems from decision-making related to shared responsibilities, with staffing of the pharmacy being the most common. Other areas of friction can include services provided by the pharmacy or infrastructure issues. One example that comes to mind for Kiran is the implementation of the ACP Standards for Pharmacy Compounding of Non-Sterile Preparations by July 1, 2021, for existing pharmacies.

“Licensees are responsible for ensuring that their pharmacy and pharmacy teams are compliant with the new standards,” explained Kiran. “This may require infrastructure changes to ensure they have the required facilities and equipment for the level of non-sterile compounding the pharmacy will provide. Renovations are associated with a financial cost and as a result, proprietors may be hesitant to implement such changes. In this case, licensees would need to educate proprietors about the new non-sterile compounding standards and collaborate to determine which level of non-sterile compounding they would like to provide and how they will ensure compliance with the standards. No matter what, licensees and proprietors need to work together to establish common ground and a path forward to ensure the continued successful operation of the pharmacy."

Harsh has a positive working relationship with his proprietor.

“We are all about the best-quality customer service and being patient focused while still being profitable,” said Harsh. “Our proprietor has a good understanding that quality is better than just focusing on the numbers.”

PPCs can also contribute to the success of licensees. Tyler works with licensees to establish goals for the pharmacy, as well as their own practice.

“These goals focus on ensuring the pharmacy or pharmacist meets or exceeds applicable standards, legislation, and guidance” explained Tyler. “PPCs assist licensees with understanding and applying standards and guidance to pharmacy practice. They also help in evaluating the safety and efficiency within the operation to support quality improvement activities.”

“To succeed as a licensee, I follow the guidance set by ACP, and the Alberta Pharmacists’ Association is also a valuable resource,” said Harsh. “I get support from the senior leaders here at the company. It really is helpful to have a supportive pharmacy team that helps you to succeed.”

Some, like Curtis, are lucky enough to have a division manager who was a licensee. Curtis suggests contacting your human resources department (if applicable) to see if they have a leadership training course if you are looking for support in that area.

It is important that all licensees thrive in their role. This will ensure the pharmacy thrives as well, offering quality care for Albertans.